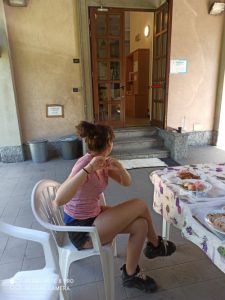 Sixteen-year-old Lucia arrived at the Omada neuropsychiatric therapeutic community after being discharged from a psychiatric facility where she had been hospitalized for self-harm and suicidal behavior. Due to her familial circumstances – separated parents, a mother with mental health problems, and a younger sister showing early signs of anxiety and mental disorder – the Italian Juvenile Court ordered Lucia’s admission to Omada to give her the best opportunity for recovery.

During the first few months, Lucia spent most of her time in bed or wandering around the community, an expression of acute suffering on her face. She communicated her discomfort physically by trying to hurt herself, escaping from group therapy, or throwing herself into the arms of Omada staff. Her anger, self-injurious episodes, and requests to be hospitalized and increase her medication contrasted sharply with moments of very mild demeanor.

Omada’s multi-disciplinary team assumed a very human but professional attitude toward Lucia, using an integrated psychoeducational and rehabilitative approach tailored to her age, personality, and family history. Through psychotherapy sessions, rehabilitation activities, school, socialization, and family meetings, Lucia came to see her difficulties as issues that could be faced and overcome. Gradually, she began to recognize her emotional fragility and relate to staff and other residents less defensively.

Omada also helped Lucia revisit traumatic moments in her life in which she was unconsciously trapped, enabling her to better comprehend the past and present. By engaging Lucia’s family in her rehabilitation path, they fostered mutual understanding and created an opportunity for them to start over with renewed sincerity.

Living in the community allowed Lucia to nurture a sense of belonging and gave her space to cultivate passions like playing the guitar. Music became a notable communication channel for her, providing a creative outlet and building self-confidence. Over time, she became increasingly independent, taking the train to go home or visit a friend. She even took a pending exam and enrolled in her 3rd year of high school.

After 18 months at Omada, Lucia had learned tools to help communicate her feelings and honed important life skills. She was discharged to an educational residential structure, transitioning to the outside world and towards a future filled with hope.